This page is a work in progress! If this message is up, then this page isn't ready to be used in any professional capacity.

The Iranian Plateau is the highland surrounded by the Zagros Mountains to the southwest, the Gulf of Oman to the south...

The visualized result of regional moment tensor inversion is a focal mechanism, or "beach ball" plot. 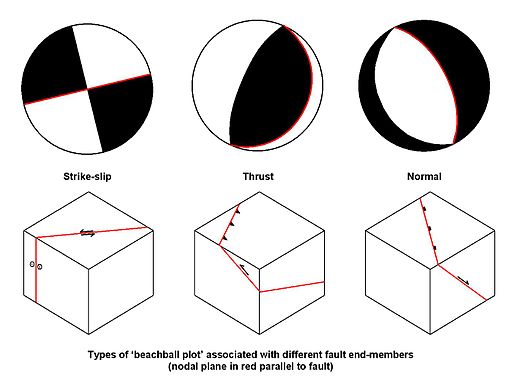 These plots describe fault motion using a combination of lower hemisphere stereographic projection and color coding. The straight lines that divide the colored and uncolored regions represent possible fault planes. The white represents a tensional, or inward, first p-wave motion, while the color (black in this example) represents compressional, or outward, first p-wave motion. For every earthquake, there are two mathematically feasible fault planes, so to determine the true fault plane requires additional data beyond the seismic waves. In terms of understanding the tectonic stresses in a region, it is sufficient to know the kind of faulting. For example, the center plot in the figure to the left shows the mechanism of a reverse fault, with most of the compression going down into the ground and up to the surface from the source. Knowing just this mechanism, but not the true fault plane, still indicates that there are tectonice forces acting perpendicular to the elongated black region in the diagram.

The simulation shows the relative velocity and intensity of p- and s-waves produced by a strike-slip fault. The relative amplitude is calculated in a way that emulates the radiation patterns in the commonly cited Aki and Richards textbook, Quantitative Seismology, as reproduced in the 2012 version of New Manual of Seismological Observatory Practices by Bormann, P., Wendt, S., and Starke, U.,

These maps show the seismicity and calculated regional moment tensors for Iran.

Here you will be able to search the regional moment tensor database.

Three sequences in the RMT database are:

More about sequences that occurred in 2017 can be read here.

The poster at that link is a work in progress for AGU 2017, and should not be considered complete or accurate. It is only available online for Geovisualization class. The LaTeX file that generated the poster can be accessed here

Regions of the Iranian Plateau

These are the main seismotectonic regimes of the plateau.